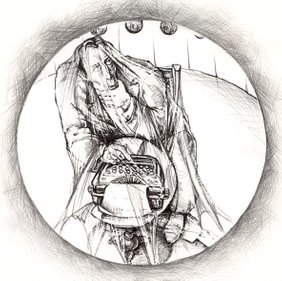 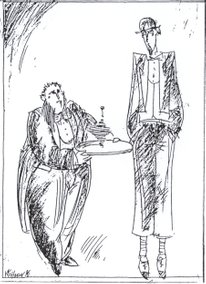 THE MAN WHO WISHED

Three old ladies are seated at a festive table, full of flowers, cakes, food and wine. They’ve come together to celebrate their life and to collect magical gifts which will be the culmination of their lives and dreams. A writer is present to witness this important moment, but is he the creator of the event or a mere biographer? There is also an old butler who seems to be master of time and space. With the help of simple objects like a spinning top and an old seagull he brings the ladies to and from the past. Traveling with them through time we see the history of the threesome; growing from small girls into young and mature women, always trying to get a grip on their lives. The writer tries to keep the situation in hand, but the dialogues slip through his fingers like loose sand. The ladies quarrel about trivialities like food, medications, the weather and no one seems interested in subjects with eternal value.

The feast drags on, seasons change, the despair of the writer grows and the waiting seems endless…until the butler brings in the gifts and everybody holds his breath…

‘The Man Who Wished’ was inspired by the work of A.P. Chekhov and S. Beckett. It is not an adaptation of plays or a collage of scenes. Deconstructed theatre texts of Chekhov and Beckett’s theatrical ideas were brought together but the story and the characters are new. Important theme’s are: fate; the relationship between a writer and his characters; artistic creation, and the discrepancy between dreams and reality. These subject may be serious ones, but the performance is a sparkling comedy; an absurd story with grotesque characters. 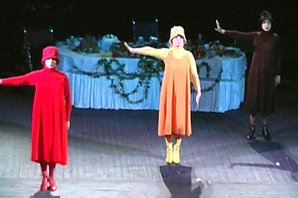 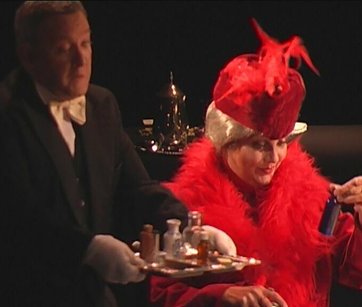 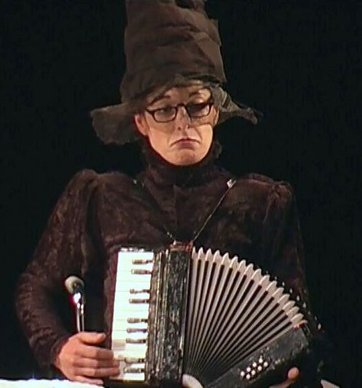 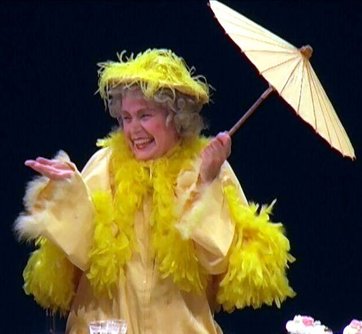 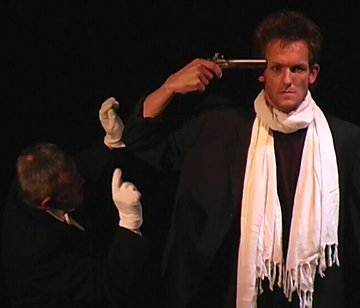 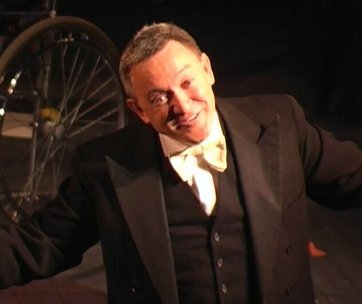 A very delicate relationship between the classical texts of Chekhov and Beckett is shown in the grotesque and humorous performance ‘The Man Who Wished’ by Amsterdam Chamber Theatre.

The former St. Petersburg director Vladimir Koifman mixed lines of Chekhov and Beckett’s characters and in this way revealed their extremely tragic-comical and farce like nature (remember that Chekhov himself wrote about his plays that they were comedies and sometimes even farces) Desperate people and their impossible dreams…

Almost all of Chekhov can be re-read in the admirable performance ‘The Man who Wished’ by Amsterdam Chamber Theatre. The play, artfully edited from Chekhov’s lines, creates a free space for the game. 5 Characters: three ladies, in ‘Red’, ‘Yellow’ and ‘Black’ (Frouke Flieringa, Sophie Ruthven Stuart, Tatiana Kouzovkina); a butler (Istvan Hezso) and a writer (Danny Ribbink) are gathered around a festive table. But in this world of frozen time the celebration either goes on forever or will never come. The actions are senseless; the writer shoots himself constantly, but never dies. The world is just a light, delicate ornament at the background of this forever immobile drama. The characters are locked in their world as if in an airless exit less space; like Beckett’s characters. This is Chekhov, viewed through the cultural and theatrical experience of the 20th century. Only at the end complete and unaltered monologues from Chekhov appear. The actresses deliver them seriously, vulnerably and sincerely. 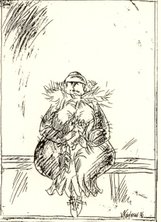 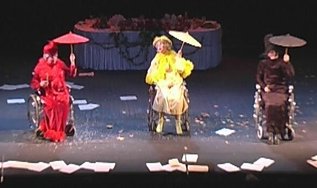