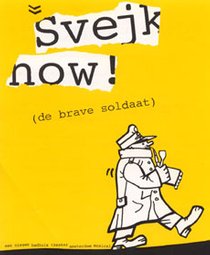 Based on the book 'The Good Soldier Svejk' by Jaroslav Hasek

The action takes place in and around a country house. A group of guests, amongst which a famous actress and a well known writer, have gathered for the summer. Love, absurdity, doubt and tragedy follow each other. A is in love with B, B with C and no one has any idea of real life. No one is listening, they all hold on to their own monologue and try to realize their separate dreams… 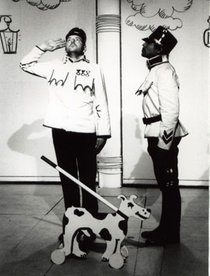 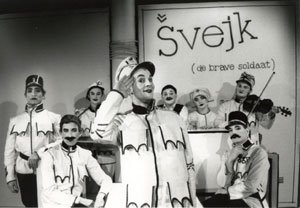 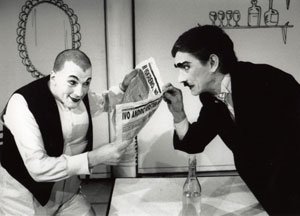 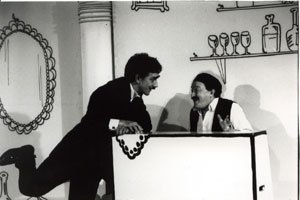 … The speed with which the actors go through the performance is justified. The director Vladimir Koifman isn’t interested in philosophizing or unnecessary worries; the characters throw words at each other as if they are juggling with balls and sticks; little dances emphasize their virtuosity. Michael Manicardi plays Svejk with dedication. His candid smile and his shaved white head make Sveyk almost a dramatic man instead of a caricature. One who knows that madness is the only weapon against the armed maniacs that surround him who seem determined to end civilization.

… In Amsterdam a small theatre company plays a performance in English, based on a novel by a Check writer. directed by a Russian with actors from the Netherlands, England, South-Africa, Scotland en Hungary and with Polish musicians who play Slavic songs The aim of the ensemble to investigate the borders of verbal possibilities and to combine various forms of performing arts and culture surprised me pleasantly.